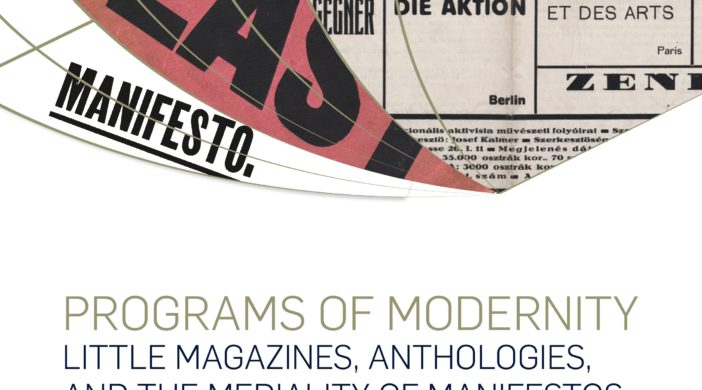 In his retrospective and epoch-making essay about “Small Magazines” (1930), Ezra Pound not only emphasizes the importance of magazines for the formulation and transmission of modernist ideas, concepts, and aesthetics, but also formulates two theses that precisely contradict some of the key assumptions our workshop wishes to discuss. The first thesis is: “The significance of the small magazine has, obviously, nothing to do with format.” And the second of Pound’s theses we want to scrutinize reads as follows: “The active periodical is something different from an anthology collected after the fact. And the periodical anthology does not enter active contemporary life as effectively as the review that definitely, even with foolhardiness, asserts its hope and ambition.” In contrast to these two convictions, our workshop assumes, first, that the format(s) of the little magazines play a pivotal role for the formulation of modernist/avantgarde manifestos, group formations, and self-observations and, second, that modernist magazines and anthologies are interrelated and pursue comparable goals on similar grounds in an equivalent ‘active’ manner.

In connection with recent discussions in periodical and modernist studies that underline the significance of both magazines and anthologies for the formation of avantgardistic movements and the conception of modernism as a critical as well as an affirmative term, the workshop is interested in three different set of questions: 1) What are the specific forms, formats and medialities of modern(ist) magazines and anthologies? Which genres develop in both areas in the first decades of the 20th century? How do anthological and periodic formats interact with and differentiate from each other? 2) In which ways can the evolution of modern magazine formats and the corresponding market be related to contemporary developments in the material (printing), advertising, and visual culture? What role does the emergence of new media technologies, especially of cinematography, play for the discourses in and the aesthetics of magazines? How do observations on various media and their innovations inform the conception of ‘the modern’ and ‘the avantgarde’? 3) Are there stable links between specific magazine formats and the ideologies/aesthetics of specific movements such as aestheticism, expressionism, dadaism, etc.? How can we describe the dialogism between the different voices and the editorial concepts inside of a single anthology or magazine but also between various publications?  In which ways do meta-narratives related to specific modernist movements cross the borders between publication genres and formats and how do such migrations change them?

By asking and linking these questions we want to retrace correlations between the three areas of (1) the ‘materiality’ and the design of periodical and anthological publications, (2) the media environment these publications are embedded in, and (3) the literary aesthetics and modernist ideologies articulated in these publications. The retracing of these correlations should on the one hand produce insights about the general role periodicals and anthologies play for the construction of the modern, modernism and avantgarde movements. On the other hand, we hope it facilitates an analytical terminology that leaves behind a simple dialectics of form and content and can describe how the programs of modernity and the media they use coincide, how the formats of modernism are always already modernist manifestos.

The workshop is organized by subproject 1 and subproject 7 of the DFG research unit 2288 “Journal Literature. Rules of Format, Visual Design, and Cultures of Reception”.